This year, International Reggae Day – hosted by Kwaku of British Black Music/Black Music Congress (BBM/BMC) in conjunction with Reggae Fraternity UK (RFUK), Campro Entertainment and various sponsors - was held over two days; I was fortunate to attend on June 30th (day one) at Goldsmiths University in New Cross. 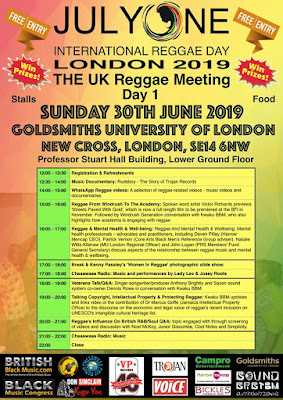 Try to imagine the scene walking up to the building from New Cross Gate Station: a beautiful sunny day, a nice expanse of green grass before one climbed the stairs to the building itself. The pulsating bass and drums of reggae music provided more than enough direction if anyone had any difficulty finding the venue.

Once inside, it was notable to see that all those who had stands were already set up – the event had already started.  Amongst those who had stands was of course Reggae Fraternity UK, Shining Stars, UK Pressure Records, TLC Global Media, Trojan Records, Musicians' Union and The Voice/Gleaner Newspaper to name but a few. I arrived just in time for the screening of the film “Rude Boy: The Story of Trojan Records. I found the film very informative, thought-provoking; Trojan Records’ place in reggae history – very moving.

Coming from the screening (reggae related videos were being shown after the film), I felt strangely invigorated! Perhaps it was because what was advertised was actually taking place and on time.  I could clearly see that this event was a step-up from last year.  Now do not get me wrong: International Reggae 2018 was decent, but here in 2019 it was clear that steps were taken to make this year even more memorable. The backdrop of outstanding reggae music provided by Chaaawaaa Radio, added to a cheerful and active networking atmosphere.

Side note: It felt good that when talking to John Logan from PRS, he observed that Chaaawaaa Radio was a licensed radio station.  How great was that?  Similarly, I was fortunate to have an in-depth conversation with Natalie Witts-Kilshaw from Musicians' Union, regarding the many benefits available to artists and musicians who become members.

Being on volunteer duty meant I was not able to attend “Reggae from Windrush To The Academy” featuring spoken word artist Victor Richards and also “Reggae & Mental Health & Well Being” segments, but the feedback of both was that it was inspirational and educational respectively; personally, I would love to see a day dedicated to exploring mental health in more detail.

An added treat was the fantastic rendition of songs from Lady Lex and Joanne Caesar aka Josey Roots, with an impromptu contribution from various artists who attended. Donovan Kingjay and Antony Richards received their International Reggae Day, People’s Choice Awards. Hosted by Audrey Scott of RFUK and Melissa Sinclaire a.k.a. DJ Cameo, it was a nice pick me up after dinner! The weather being so nice, one could take a breather outside, go into the hall for relevant panel discussions, or check out the stands whilst listening to some exceptional reggae.

We then had a Veterans Talk/Q&A Session led by Singer-songwriter/Producer Anthony Brightly of Black Slate and Dennis Rowe - Saxon sound system co-owner in discussion with Kwaku BBM.  It was interesting to see the different work ethic and proactivity that each used to achieve their particular success.  This was swiftly followed by “Talking Copyright, Intellectual Property and Protecting Reggae” – definitely must for those in the music industry!

The day was rounded off nicely with “Reggae’s Influence on British R&B/Soul Q & A” with soul groups Cool Notes and Simplicity on the panel.

I am sure that Kwaku BBM,  RFUK and Campro will have reviewed both days and already cited areas for improvement; nevertheless, I was impressed.  Through obvious planning and consistency, the IRD Team pulled off a remarkable and enjoyable day.  Being able to cope with anything that may not go according to plan, with calmness and a cool head was key.  The atmosphere created and how we all functioned together, was gratifying.

From networking and speaking in-depth to the representatives on the stands and those attending, I wished more from the industry had attended. I fear that there may be benefits  that we are not aware of, which events like International Reggae Day can highlight; though, we cannot avail ourselves of these benefits if we are not present.


Roll on next year!

Posted by Coral Consciouslee at 12:56